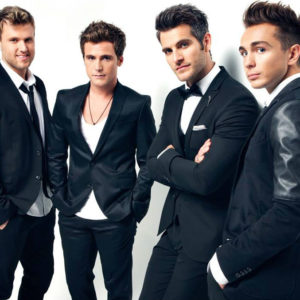 For Anthem Lights—an innovative, high-energy pop foursome with soaring vocals and hearts bent on ministry—“Stranger” is more than another song. It’s an identity, a way of life they’ve embraced. It’s a powerful truth that impacts every decision they make, underscores every lyric they write, and every note they sing.

“As followers of Christ, we were not made for this world,” explains Anthem Lights member Alan Powell. “We don’t belong here. And all the self-doubt and insecurity and struggling to fit in, it’s all part of believing the lie that we’re supposed to be ‘at home’ here. God created us in His image—there’s nothing to doubt about that! We’re here to love others and be Christ in the world. The closer we get to Christ, to being what we were created to be in this world, our value of what this world values begins to fade.”

It’s an important message for misfits of any age, but especially for millions of teenagers struggling to find a well-lit place in an increasingly dark world.

Anthem Lights can trace its roots back to the fall of 2007, when singer/songwriter Alan Powell joined forces with then aspiring solo artist Chad Graham. Both were living in Los Angeles at the time, to pen songs for Chad’s solo effort. But providentially, the more they wrote, the more it became clear that these powerful, harmonic songs were meant for a group. Within a matter of days, the pieces fell into place, when two other Liberty University students—Caleb Grimm and Kyle Kupecky—came on board, “When God put the pieces together,” says Powell, “we just knew it was right. Everything just fell into place… like it was meant to be.”

After months of writing, recording and prayer, Anthem Lights signed with Reunion Records and began fleshing out what would become its self-titled debut.

“These songs were born out of what we’ve experienced over the past couple of years, spiritually,” Powell continues. “We’ve had to learn some very difficult lessons about who God is and who we are. We’ve gone through moments where we felt really close to the Lord, really felt Him at work in our lives, and then very real moments when you feel you’re going around in circles and can’t find Him at all. I think we’ve just tried to be really honest about what that darkness feels like and yet make it clear that ‘the Light always wins.’”

With four extremely gifted vocalists and a wealth of songwriting talent, Anthem Lights is a force to be reckoned with. But from the beginning, notes Powell, “We were intentional on being more than just another pop group. We understood our calling, that we were meant to be more than ‘music business.’ We were called to share the Light we’ve been given. To build people up. To lead the way.”

“So many people get up and chase what they chase,” adds Caleb Grimm. “There’s no real reason to wake up in the morning, no real reason to live. But Christianity is supposed to be everything to us… it’s not just a free ticket to heaven. It’s everything. Pop music is just the medium we use to get the Gospel out there.”

“We take this ministry very seriously,” says Chad Graham. “God has always been leading us down this path, and so we want to use what God has given us to get this message out to people who need it: ‘Your life has purpose and meaning in Christ.’ We all struggle with the idea of perfection, and we all stumble and fall, but that purpose for our lives never goes away. And God never, ever gives up on us.”

Produced by Juan Otero and Seth Moseley, aka The Write Brothers (Newsboys, Me in Motion), and Rob Hawkins (Fireflight, Chasen), Anthem Lights’ debut carries a message of hope and purpose for believers and non-believers alike. From the gloriously contagious pop of “Can’t Shut Up” and the danceable energy of “Outta My Mind,” to more tender moments like “I Wanna Know You Like That” and “Can’t Get Over You,” Anthem Lights infuses a little something for everyone on its stunning debut.

With an arsenal of influences including dcTalk, Michael Jackson, One Republic, Stevie Wonder, Gavin DeGraw, tobyMac, and Justin Timberlake, Anthem Lights has fashioned a dramatic pop experience that is all their own… a rarity in today’s music scene.

“I feel like we landed in a really original place,” says Powell of the band’s sonic approach. “We wanted it to sound big, textured, layered, to give you that feeling of being swept away, and to really connect with pop music fans. But we wanted it to have an edge too. Live instrumentation is important to us as a group, so we wanted to keep that authenticity and accessibility… incredible keys, real guitars and real drums. With those barometers, we were confident in our producers and their great musical sensibilities.”

But ultimately, adds Kyle Kupecky, it’s the message behind the music that ignites and inspires every note. “It comes down to the three things we love: music, entertainment, and Jesus… And the greatest of these is Jesus. We’re here to help people know who Jesus is and connect on a deeper level with Him. For those who don’t know Him, we want to make that introduction, to say ‘your life has a bigger purpose.’ There are such hedonistic messages in our culture—from music, movies and TV—‘if it feels good, do it,’ but we want to give them something that speaks to their soul, to encourage them and support them as they grow up in Christ. And for believers, we just really want to start a fire in them.”