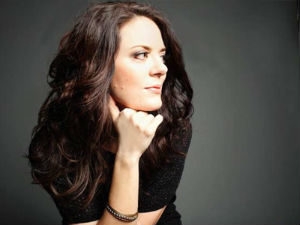 Christy Nockels was born in Ft. Worth, TX as a “seminary baby”. She grew up in Oklahoma as the daughter of a pastor and a piano teacher, which infused her heart early with a love for both music and God’s word.

Christy met her husband Nathan in 1993 at the Christian Artists Seminar in Estes Park, CO. They married in 1995 and the two began serving as worship leaders in their local church in Oklahoma City, while Nathan finished college at Oklahoma Baptist University. It was during these early years that they began writing songs together in their tiny, one bedroom apartment. In 1996, the two made an album entitled “Holy Roar” under the name “Sons & Daughters” with fellow worship leader and friend, Charlie Hall. Louie Giglio, the founder of Passion Conferences, got a hold of this album and invited Christy, Nathan and Charlie to attend the very first Passion Conference in Austin, TX in 1997. Later that year, Christy and Nathan moved to Texas where they led worship for Metro Bible Study, a weekly gathering of 3000 young adults at Houston’s First Baptist Church. It was there that they were “discovered” by the folks at Rocketown Records, a small label owned by Michael W. Smith. Eventually they signed a recording contract as “Watermark” and moved to Nashville, TN in 1998.

Together as Watermark, Christy and Nathan recorded five albums with Rocketown Records. They composed a journey full of songs, 7 of which were #1 radio singles. They have been nominated for numerous Dove Awards, including Christy’s nominations for Female Vocalist of the Year, and their album A Grateful People was up for both Inspirational Album of the Year and Praise & Worship Album of the Year. After 5 albums, Christy and Nathan felt led to end their Watermark season to focus on other areas of ministry. This gave Christy more time at home with their children, and more availability to focus on leading worship and even teaching some for various women’s events. Christy and Nathan have continued to serve at Passion Conferences and in 2008, they moved to Atlanta, GA to be a founding family of Passion City Church. Christy will be releasing her first solo worship project with sixstepsrecords, produced by Nathan, in June of 2009. Christy’s heart through leading worship and song writing is to help people communicate intimately with the living God, and to leave a legacy of proclaiming Jesus’ fame to this generation. Christy’s most treasured legacy is her three children, Noah (8), Elliana (6) and Annie Rose (18 months).