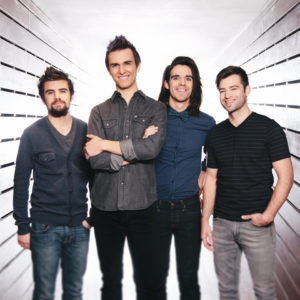 Citizen Way is a true band of brothers – in the literal sense. This infectious rock four-piece is comprised of two sets of siblings with strong ministry backgrounds and a mutual passion for music that began long before the band officially formed in 2004. Band members Josh and Ben Calhoun and David and Ben Blascoe share a camaraderie that is undeniable and results in a unique, unparalleled connection for a band that has plenty to say.

Months before their April 2013 label debut album, LOVE IS THE EVIDENCE, this promising new signing was already generating buzz — even as they continued to write and record. The band’s first single, “Should’ve Been Me,” made an impressive debut, shooting up to the top of the charts and peaking in the Top 5 on Christian AC radio. The tune was penned in 20 minutes by Ben Calhoun after a conversation with a group of students at the camp where he was leading worship. “We had just taken these students through a crash course from Genesis through Revelation. It was the end of an incredibly powerful week and we were asking them what they had learned,” recalls Ben Calhoun. “One of the kids spoke up and simply said, ‘I learned that it should have been me.’ I remember thinking that was pretty profound for a 14-year-old and was inspired to write this song.”

Amist their chart success, Citizen Way landed a slot on their first nationwide tour with another talented band of brothers, the multi-award winning group, Big Daddy Weave. The band is thankful for the new and larger platforms after years of hard work honing their skills – playing at camps, retreats and youth group events and investing in their fans who have been behind them from the very beginning.

All four band members grew up in strong ministry families. Josh and Ben Calhoun, the group’s primary songwriters were heavily influenced by their mom’s musical gift and the Calhouns were on stage singing at church from an early age. The Blascoe brothers had a more urban upbringing than their bandmates and while their parents weren’t musical, they were music lovers, exposing the boys to live shows by early Christian acts like Petra and Mylon LeFevre.

The Blascoe brothers each found music in their own way. For David, it started in fourth grade. “What actually made me want to play drums was a movie called That Thing You Do,” he explains. His parents eventually set him up with a drum kit and gigs at church and stints in a series of high school bands soon followed. Ben Blascoe’s instrument choices were based on what he didn’t want. “My older sister took piano lessons, and I was determined to not play that because I remember her having to pound away at practice,” he recalls, adding, “I wanted to do something very different.” Maybe that’s why, as early as elementary school, anytime he saw a guitar he’d pick it up and try to play it. Eventually, he borrowed a bass from a friend and would sit in front of the CD player trying to copy what he heard, whether it was Credence Clearwater Revival or The Cranberries. At 16, he got his own bass and never put it down.

The beginning days of Citizen Way initially started when the two Bens met while studying at Judson University outside of Chicago. Ben Calhoun was a music major, drawn to the intricacies of theory and simultaneously also a big fan of pop radio, with each new song a potential experiment in merging those two loves. Calhoun says, “Judson was a pivotal place for me, it’s where I was able to develop and set my musical and ministry direction. I’m grateful for the school and it’s such a cool privilege to serve as an Adjunct Professor there now.”

As a freshman, Ben Blascoe was playing his bass in the dorm one day when the Ben Calhoun poked his head in. There was a connection and so when Ben Calhoun was ready to record some songs he had composed, he asked the other Ben to join him in the studio. He also recruited his brother Josh, on drums then, who had been playing with the band Augustana while in college. After the project was completed, the trio continued to play together eventually adding David as the band’s drummer and Josh moving to keys.

Citizen Way has collaborated with acclaimed producer Seth Mosley (Hawk Nelson, Audio Adrenaline, former lead singer of Newsboys, Peter Furler) on their debut release. With the help of Mosley, the album merges the influences of all four members, showcasing their melodically, talented songwriting and sound that audiences have come to love. The recording process, helmed by Mosley, has allowed the group to get an even clearer picture of who they are together and the magic that can happen when their collective God-given gifts merge. The result is melodic, meaningful rock that melds the talents of all four members into something that shimmers with diverse influences that range from PFR, Steven Curtis Chapman, Newsboys and Andrew Peterson to P.O.D., Coldplay, The Killers and Brad Paisley.

The name of the band comes from a few key ideas in scripture that are important to the guys. “Ephesians reminds us that our true citizenship isn’t here on earth, but rather in heaven,” explains Josh Calhoun, “Jesus calls Himself the way and the book of Hebrews talks about the new and living way we have because of Christ’s sacrifice, Acts actually calls believers followers of the way. So Citizen Way is an idea that we’re part of something bigger, God’s kingdom.”

Now Citizen Way hopes to build on the immediate connection they’ve enjoyed with people through their debut single, “Should’ve Been Me.” “Each time we sing ‘Should’ve Been Me’ I still remember the moment when God moved in my life for the first time and I go back to that special week at camp” says Ben Calhoun. “I’m reminded of what He did for us on the cross and how grateful I am for the life that I have in Jesus. Our hope is that people will hear our songs and are also reminded and encouraged in this same way.”