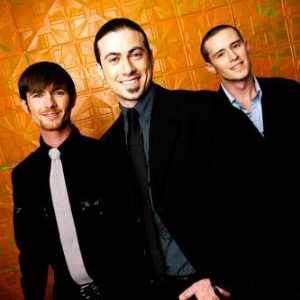 Meet Crystal River – a group of unique young men in their twenties.  Their youthful, energetic, and ministry-oriented performances have been thrilling people and changing lives everywhere they go.  From intricate acapella arrangements to classic gospel harmony, Crystal River delivers a powerful performance with a modern spin on the traditional sound of Gospel Music that will bless you from head to toe.

Tony Churchill was raised in a very Godly family.  Tony’s grandparents and uncle were all minsters and his parents made sure he heard all of their sermons!  Tony started singing in church at a young age and spent his high school years performing in Chorus, but did not realize his call to minister in Gospel Music until after high school.  Tony recalls, “I remember being in North Carolina at a revival after I had been singing Gospel Music for three years.  That night the Lord spoke to my heart very clearly with a definite call to minister in song.  Tony married his high school sweetheart, Meredith, and they and their daughter, Laila, live in Winder, Georgia.  In his off time Tony enjoys spending time with his family and playing golf.  Tony is also a big Florida Gator fan, which makes things every competitive with Ben come football season.

Ben Mooney, affectionately known as “Little Ben”, also comes from Winder, Georgia.  His dad, Mike Mooney, a minister himself, always encouraged Ben in the ways of the Lord and made him aware at a very young age that his God-given talent was meant to be used for Ministry.  Ben received many awards through his chorus years in school, such as all-state and many men’s ensemble superior awards.  Receiving God’s call on his life in high school, Ben says, “I have always felt that everything I have was given to me by God, including my voice, so I will use it to praise Him”. Ben is married to his high school sweetheart, Jessica, and they are raising two little Georgia peaches, Riley and Ansleigh.” In his off time Ben enjoys spending time with his family, riding his four-wheeler and cheering on his Georgia Bulldogs.  If you get to Singings early, you might get to see him in his lucky bulldog flip flops which he says helps him sing better.

Randy Gober, raised in Southern Gospel his entire life, makes up the baritone part of Crystal River.  From a young age he traveled and played the drums for his family’s group and he credits this to helping form his unique talent of Beat-Boxing.  “For many years I played the drums.  You don’t always have them with you when you’re in a car or at a concert listening to music, so I would rehearse the drums with my mouth”.  With his unique talent and smooth voice, Randy is a key part of Crystal River.  “It is a blessing straight from God to sing this great music.  Then to add in there being able to do it with your best friends whom you have known your whole life, makes it even sweeter”.  Randy makes his way from Winder, GA where he raises his beautiful daughter, Peyton, with is wife, Allison.  In his off time Randy enjoys time with his family and any concert that comes to town.  Randy quotes, “I just love this music!  Any chance I get to be around it, I take advantage!”

Tommy Brooks entered the musical world when he was just 7 years old, playing piano at church.  From then until the age of 15, he sought to develop his gift through private tutelage.  He then embarked upon the study of classical piano for the next four years.  While he played with several Southern Gospel groups through the years including many of the top names today, Tommy devoted most of his time playing piano with The Sunny South Quartet.  “Its is so much fun to get to play with Crystal River. Together we share the same passion for Christ and strive to be the best we can at the talents he has given us.  I am looking forward to what God has in store for this amazing ministry”. Tommy celebrates life with his three children, Scott, Kelsey, and Jason.  Outside of music, Tommy enjoys college and professional football, maintaining local allegiances to the Georgia Bulldogs and the Atlanta Falcons, and he also enjoys horses.  He notes his favorite piano as the Yamaha Grand and names as his influences Nick Bruno and Anthony Burger.  Tommy also makes his way from Winder, GA.  Tommy’s favorite Bible verse is Psalm 116:6 “The LORD preserves the simple: I was brought low, and he helped me.”

Ben, Randy, and Tony formerly sang in a local acapella group.  Their manager, at the time, Cecil Hodge, approached Beckie Simmons and her husband Glen Bates at a Promoters Banquet in Nashville, Tennessee, which led to the forming of what we know now as Crystal River.  Cecil has since gone on to be with the Lord, but Tony, Ben, and Randy will always chersh the memories and lessons learned through Cecil.  At Cecil’s funeral, they were heard to say, Cecil believed in us more than we believed in ourselves; and they will forever be grateful to him for directing their paths straight to Southern Gospel Music!

Crystal River is a recording artist for BSA World Records.  Their projects are written, arranged, and produced by Glen Bates.  Many songs are co-written by the great Glenn Ashworth.  Bates and Ashworth’s songs, along with Crystal River’s exciting presentation, is a unique blend, a “match made in Heaven”.

Crystal River is exclusively represented by the Beckie Simmons Agency.  Beckie states, “Crystal River has evolved into a dedicated ministry and evolution that came through commitment, dedication and trust in God, the One who is absolutely leading their way.”  Crystal River will entertain, inspire, minister, and touch your heart, both young and old alike!”