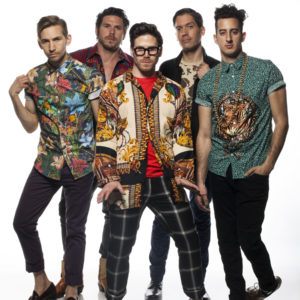 Hailing from the depths of the durrty south, the mighty Family Force 5 has spent the last eight years on a bombastic, arduous crusade, conquering clubs and arenas worldwide with an unrepentant swagger that has made the band the poster child for DIY business models in the music industry. Boasting a gritty concoction of mammoth beats, mouth-watering melodies, and explosive guitars, the dance-derived, fashion-forward five-some from Atlanta has crafted an impressive resume built on sweat and elbow grease.

The group assembled in 2001 under the title The Phamily (largely influenced by the fact that there are three brothers in the band), and immediately created a contagious buzz around town, freely distributing burned copies of their homemade demos throughout Atlanta. The five emerged from their rat-infested practice space as often as possible, jumping at any chance to ignite a club with an electrifying performance, and word about the band’s break-dancing, wall-climbing shows started to spread. It wasn’t long until attorneys for Prince issued a cease-and-desist order about the name. (The Family was the ad hoc outfit the Purple One put together to record “Nothing Compares 2 U.”) Undaunted, the quintet carried on under the banner of Family Force 5, tearing up crowds that grew numb to nü-metal’s Cookie Monster-sounding excess. It wasn’t long before the band signed with the Maverick label, issuing their debut album, Business Up Front, Party In The Back in 2006. At their best, FF5’s dealings with the major-label machine were tenuous. Crowds culled from assorted music subcultures (rock, punk, metal, alt-rock, hip hop) were taken by the band’s show, but the label didn’t know what to do with the unique group. Inevitably, they split ways in 2007: the band members celebrated the occasion by going out on several weeks of that year’s Vans Warped Tour, rejuvenating both the crowds and themselves.

Coming off the high from the Warped dates, Family Force 5 decided to create its own label (Transparent Media Group), and release its next album, Dance Or Die, independently. Infectious in its enthusiasm, D.O.D. was a near-perfect amalgam of dense grooves (“Radiator”), synthesizer-driven funk (the title track), techno-pop nostalgia (“How In The World”) and inspired emo (“The First Time”) that seemingly erased the lines of demarcation between dirty rock clubs and cosmopolitan dancefloors. The band’s knowledge of its fanbase and close connection to the kids (who bought over 350,000 digital singles and over 150,000 copies of their debut album) created a strong brand that didn’t need a major label behind it to succeed. After a busy 2009—which included compiling Dance Or Die With A Vengeance (a remix album featuring 3OH!3, Relient K, and Cobra Starship), teaming up with Skelanimals for an exclusive EP release for Target, and unveiling the Family Force 5 Christmas Pageant album-the band joined forces with 3OH!3 and the Maine to co-headline an entirely sold-out AP Tour.

After enduring a incessantly grueling tour schedule (which featured a mainstage slot on the UK’s fabled Sonisphere Festival), and a near-death illness for bassist Joshua Olds (Fatty), FF5 proudly returned for its fourth stint on the Warped Tour as one of the premiere independent bands in the world, scanning more than 150,000 units on its own record label since creating Transparent Media Group. The band has continued to drop jaws, landing opportunities previously unavailable to an indie artist: placing songs in major films (Battleship, Almost Alice, Warrior’s Way); winning countless awards by landslide votes (Yahoo’s Who’s Next, MTVU’s Freshman Class, AP Reader’s Choice Awards, etc.); and scoring significant press in nearly every major outlet. The band’s creativity flourished in 2012, releasing the highly-anticipated album III, its electrifying concomitant EP III.V, plus 5 well-received music videos, featuring countless fans as extras. In addition, the relentless five stumbled into a brand new realm, producing Phenomenon, an inspired collective that produces electronic music and wildly celebrated dance parties in sweaty tents across the world. Fresh off the heals of successful international tours (New Zealand, Australia, the Netherlands, the United Kingdom, etc.), Family Force 5 jumped onto its second run on the Rock and Worship tour, using the off-days to film a cathartic, buzz-worthy video for the band’s latest single “Chainsaw,” which is the featured track on FF5’s new remix album Reanimated. Fittingly, the football program for the Oregon State Beavers embraced the song (along with its accompanying dance), and has implemented it as a staple rally cry in the stadium for the 2013 season.

In September of 2013, frontman Solomon Olds announced his decision to discontinue his touring career with Family Force 5, allowing him to focus his efforts on writing, remixing, and spending time with his family. Drummer Jacob Olds moved from behind the kit to the front of the stage, assuming the role as lead vocalist, and the band hired Teddy Boldt to round out the lineup on the drums. The fivesome is currently working feverishly to complete its fourth full-length album, which is currently slated for release in early 2014. Anyone familiar to their mythology knows, when Family Force 5 activates its collective booty-movin’ powers, there’s not a single rock club, dance floor or house party it cannot vanquish.