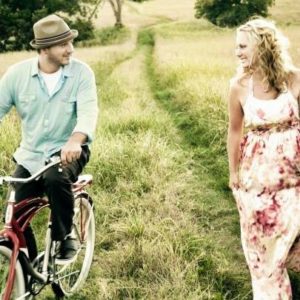 Jeromy and Jennifer are not normal.

At 6 a.m., you can usually find Jeromy attempting to cleverly evade his dog Fritz, who has attachment issues, in order to get out the door and down the road to the bakery without waking him and, in turn, waking the kids. (Fritz and Jeromy have a love/hate relationship. It's complicated.) He doesn't have to be awake at this hour, but he works best between the hours of 6 a.m. and noon. Not normal.

His wife Jennifer is also not normal. This is because she manages to be genuine, clever, beautiful and stylish all at the same time on any given day. Oh, and she's also an Olympic-level mom to Hutch, 9, and Sadie-Claire, 4, knows her way around a farm, and can turn an ordinary living room into a magazine-ready schoolroom without even plastering it all over Instagram for everyone to see. Jeromy will willingly admit that he married up.

After spending the first ten years of their marriage sleeping in separate bunks with limited head room and raising a toddler on a tour bus, the Deiblers, also known as FFH (Far From Home), took some time off and journeyed to South Africa in 2006 to find some simplicity and reconnect as a family. There, when Hutch was three years old, he apparently managed to get a hold of the direct line to God and asked for a baby sister. Soon after, Jennifer became pregnant with Sadie-Claire. Hutch later came to regret his request.

The family enjoyed their peaceful life in South Africa, learning how to pay more attention to their neighbors than a schedule---a significantly different mindset than most Americans have come to know. Coming back stateside six months later was understandably a jolt of culture shock.

“Relationships come first in Africa,” says Jennifer. “It’s in the heritage of the culture, it’s in us all really - we just have to be in a place where we can rediscover it. That’s what happened for us in South Africa.”

In 2008, now back in the States, Jeromy took a position as a part-time Artist-In-Residence (also known as "Worship Leader") at Fellowship Bible Church outside of Nashville, and the Deiblers, anxious to plant their roots in one place for a while, once again made Franklin, Tennessee their home.

May 1, 2010 began one of the most difficult seasons of the Deibler’s lives. What began as a spring rainstorm soon morphed into the Great Nashville Flood, barreling through the lives of thousands of residents of Middle Tennessee, including the Deibler’s. The flooding, which alone would have been stressful, left in its wake a house riddled with poisonous mold and an exhausting legal battle with insurance companies, thus completing its apparent quest to prove Murphy's Law.

The toxins were extremely harmful, particularly for Jeromy, who had been diagnosed with multiple sclerosis in 2007 and therefore has a weakened immune system. Because the mold was released into their home, the Deiblers were forced to get rid of nearly all their possessions, including all of their family heirlooms and sentimental pieces such as artwork Hutch and Sadie-Claire had done.

"We moved four times during that period, feeling much like the Israelites as they wondered around the desert in an area not much bigger than Franklin," says Jeromy.

The family finally found a semi-permanent home renting a small house in Franklin.

"We lost everything”, Jeromy says. “Everything we’d ever owned or saved, but we were safe, and oddly enough, happy.

Fortunately, this house is still a short bike ride from Sonic and the local frozen yogurt chain, Sweet Cece's, both places where you will frequently find Jeromy, and possibly even his family, chomping on pellet ice or chugging Original Tart froyo with graham cracker crumbs.

Over the course of the more than 15 years in which FFH has been making music, the band has sold 2 million albums and garnered seven no. 1 hits, several Dove awards, a Billboard Music Award nomination, and 15 top 20 hits. The group has performed more than 1500 concerts across the country since 2000, during nearly all of which Jeromy has made it a priority to share with anyone who will listen that Jennifer is two years his senior. (Sorry, Jennifer.)

FFH now releases their 14th studio album, The Way We Worship, a reflection of the simplicity the musicians seek in their own lives and a harkening back to Jennifer's roots growing up on her family's farm in Missouri. The stripped-down album displays overtones of a bluegrass-country style on many tracks, while still incorporating the more modern worship music style the Deiblers have come to love on others.

The Way We Worship was born out of the sweet moments in the Deibler’s home when Jennifer would sing hymns over Hutch and Sadie-Claire to help them fall asleep. Jennifer and FFH's guitar player recorded some of the songs simply for the kids to enjoy later on in life (and to give Jennifer a night off), but through the years they became a sort of side project, and eventually, the songs that inspired The Way We Worship.

Though composed of a handful of seemingly random components, the album remains a cohesive reflection of the Deibler's spirit and their desire to live in what Jeromy frequently calls The System, while walking what he refers to as The Ancient Paths. (Jeromy is all about walking the Ancient Paths.)

The album shines as a unique pause amid the chaos of everyday life--to consider God's kindness and goodness, even in the wilderness.

“Most of our records have been strategically planned and written,” Jennifer says, “This one however, seemed to almost record itself. I think it happened that way because this music comes so natural to us and our family. It really is the way we worship”

Nothing about the Deibler’s journey has been "normal"--from beginning their marriage on a tour bus, to living in Africa, to walking through hardships like multiple sclerosis and losing everything they owned. But these hardships have shaped two strong, godly people who are leading their family, and even their fans, towards life in Christ despite circumstance. When "normal" is flipping through status updates until your eyes cross and trying to keep up with the American Dream, a little less "normal" is a welcome change.

Jeromy and Jennifer continue to serve as part-time resident worship leaders at Fellowship Bible Church in Franklin TN, leading worship there approximately twenty-five times per year, while also keeping a steady touring schedule with FFH. The couple and their two kids, Hutch and Sadie-Claire live in Franklin TN.