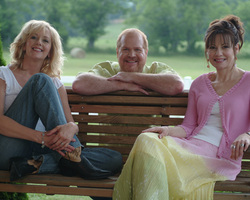 The story behind First Call and their latest hymns cd, REJOICE is the true revelation of God’s heart for redemption. For those both familiar and unfamiliar with First Call’s history, here’s the overview.

Melodie Tunney, Bonnie Keen and Marty McCall met in the mid 1980’s as studio musicians, considered in Nashville Tennessee as the ‘first call’ by producers for background vocals and commercial jingles. They recorded an a capella Christmas album Evening In December with David Maddux, who would later work with them on Somethin Takes Over. While touring with Sandi Patty, the trio recorded their first pop cd, Undivided which showcased not only the groups’ gifted vocals, but introduced them as songwriters and propelled First Call into the forefront of Contemporary Christian music.

Much to their surprise, three Dove awards and five Grammy nominations would follow. Still working as studio singers at home, they chose to focus their writing and performance skills on a newfound ministry. Songs like ‘Undivided, ‘The Reason We Sing’, ‘O Sifuni Mungu’, and ‘Sweet Love’ seemed to fuel an audience hungry for a harmony driven trio, many times likened to the sounds of Manhattan Transfer. Yet beyond the accolades, the group shared something that survived years of success and turmoil—a heart for Christ and friendships that would endure times of separation and change.

In 1990, Melodie felt led to leave First Call to join her husband Dick Tunney in their own concert and songwriting ministry. Yet behind the scene her heart was never disconnected from the bond she shared with Bonnie and Marty. “You hear about a group breaking up and that there’s dissension and strife,” Mel states. “With the three of us there was none of that.”

During the ensuing years, Bonnie and Marty continued the ministry of First Call with another talented vocalist, Marabeth Jordon. The trio went on to record two more highly acclaimed cds, Human Song and Sacred Journey with the new alto. Higher profile tours and writing nearly all of their own material followed. Five years later, ready to sign the largest contract of their career, life happened. The painful, personal events of 1994 split the group apart. While on tour with a high profile male artist, Marabeth was caught up in a public scandal, which led to her resignation from the trio. “People still ask about Marabeth leaving,” says Bonnie, “Although we are at great peace as friends, it’s part of First Call’s journey. She was a tremendously creative and talented member of First Call, and nothing will diminish her contributions. Questions come because they are a valid part of our history. As with Mel, Marabeth is a spectacular vocalist. We grieved with her and for her family, and are also grateful that God has moved us all past the circumstances that caused her to leave.”