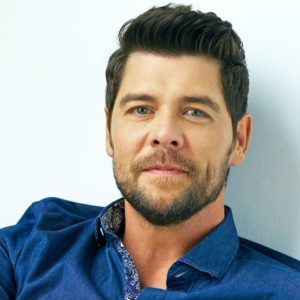 His unmatchable voice, unparalleled charisma, GRAMMY nods and seventeen Dove Awards aside, Jason Crabb is a rare breed. Neither defined by, nor confined to a genre or even a singular career path, his powerful, emotive voice and talent transcend industry labels and artistic nooks. Add to that his authentic humility and relentless commitment to cultivating the most from what God has given him, and it’s clear that Jason Crabb—the vocalist, the author, the actor, the all-around entertainer—is an anointed phenomenon.

Born and raised in Beaver Dam, KY, a rural southern town known more for its catfish than culture, Jason’s voice and values were steeped in the tradition of faith and family. At the age of 14, Jason took to the road with his family, endearing himself to audiences around the country and the globe with his searing vocals and transparent faith.

Dove Awards were but the icing on top of the family’s illustrious career. But, as with all things, the family grew, changed and the members obediently took steps in faith to follow their own God-directed paths. For Jason, this meant going solo. 2009 saw his self-titled solo album race to the top of the charts, while Jason’s rise and notoriety as a soloist earned him nomination after nomination.

In 2012, Jason walked away with not only Male Artist of the Year at the GMA Dove Awards; he took home Artist of the Year as well, marking 20 Dove Awards throughout his career, not to mention the GRAMMY Award he took home in 2010. And he did it all not with fanfare; but with humility.”Rarely have I met an artist with even a portion of Jason’s talent react with such authentic surprise and gratitude at honors like these,” says CCM Magazine editor, Caroline Lusk. “He demonstrates the same grace he sings about on-stage and off.” As it turns out, the demonstration is as unintentional and natural to Jason as his multi-octave range. Grace is much more than a PR phrase or concept to Jason. His own pain, loss and heartache, partially emanating from issues with infertility and miscarriage that he and his wife have lived through, have molded his heart with even greater compassion and sensitivity.

“People everywhere are hurting,” Jason says. “Their backs are against the wall. They’ve lost their jobs, their 401Ks. Big corporations are shutting down... We’re human and we stumble over everything we’re trying to be, to live up to....”

In his book, Trusting God to Get You Through, released in 2011, Jason revealed just how human he really is, inviting readers to see first-hand the work of God in his life. “I’d love for somebody to think, ‘If that boy can make it and there’s hope for him, then I can go through these things and there’s hope for me as well,’”

Jason shares. If Jason’s life is any kind of a template or example of God’s working, suffice it to say, hope abounds. And, as is so often the case, hope begets hope, begets gratitude and expression. Jason is already hard at work on two other books—a children’s book and an inspirational book all about dreams—a topic he knows inside and out.

"You don't have dreams to just sit there and think about them. God gave you dreams for you to get up and go after! Go for your dreams!" says Jason. Following his own advice, he also made his silver screen debut in 2012 in the film Inspiration Pop 2929, co-starring alongside Larry Gatlin and Jackie Stewart (Sling Blade, A Time To Kill).

Musician, author, actor, host…Rarely, if ever, has the Christian music industry, or the entertainment industry as a whole, been privy to such a broadly and deeply talented artist. But despite the enormity of his talent, what truly distinguishes Jason from the rest is his unwavering humility and gratitude.Long-time friend and mentor Bill Gaither sums it up: “Jason Crabb is the real deal. I love his voice, I love his heart, and I love the unique way he connects people to the hope every human being needs to hear.”

Hope that Jason has found, lost, rediscovered, relied upon and shared…

Hope that diminishes the most illuminating celestial event.

Hope that can only be described as phenomenal.

Inside and out, from the studio to some of the world’s most prestigious stages - Carnegie Hall, the Grand Ole Opry, the Brooklyn Tabernacle, Billy Graham’s final crusade in NYC - to a hospital room, Jason Crabb is God’s grace and hope walking—a true, anointed phenomenon.