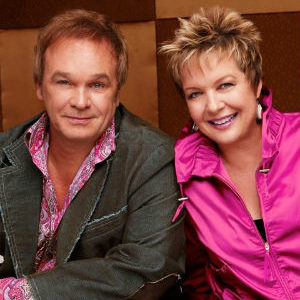 For GRAMMY® nominated Jeff & Sheri, gospel music is genetically programmed into their DNA. As members of acclaimed musical families—Jeff’s father is one of the Easter Brothers and Sheri’s mother is a member of The Lewis Family—they grew up surrounded by the sound of people praising God through their musical gifts.

In August of 1984, both were at the Albert E. Brumley Sundown to Sunup Gospel Singing in Arkansas. Jeff, who was playing bass for the Singing Americans at the time, took the opportunity to reintroduce himself to Sheri’s mother Polly; they had met on a previous occasion. Polly introduced Jeff to Sheri and the two were married ten months later.

They traveled and performed as part of The Lewis Family for several years. But in 1988 they decided it was time to strike out on their own, and they haven’t looked back since. Also joining Jeff & Sheri on the road is their son, Madison, who plays electric guitar for the group and their daughter, Morgan, who sings the harmonies, Maura Grace, the newest addition to the family, is a regular highlight of Jeff & Sheri’s program, and Kyle Calloway plays drums.

Apart from their frequent appearances on the Gaither Homecoming tour and videos, Jeff & Sheri have a fairly heavy touring schedule of their own. “When we perform, we want people to leave a little different than when they came in,” Sheri explains. “We want them to have a great time smiling, laughing, crying, and healing. We want them to know God loves them and that He is in control.”