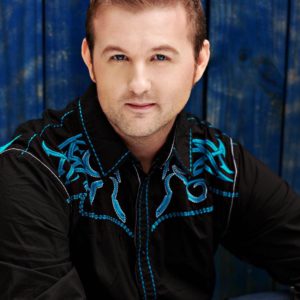 Soulful, Christian Singer, Two Time ICMA Nominee and Nashville recording artist John Clark Blackwell has been making music for over two decades now. His upbeat style and stage presence draws his audience into his world and keeps them there for the entire show. From small intimate crowds to thousands of super excited fans, he is able to communicate with his fans in a way that they feel like they know him on a one on one basis.

John grew up, eager to listen to many different styles of music, drawn to complex harmonies and heartfelt words. He first discovered his musical gifts when he was six on his way home from a family camping trip. After listening to several verses of Chicago’s hit “You’re my Inspiration” on the car radio, he sang for the first time ever, perfectly matching the chorus. He began to compete in local and state talent shows at age eight and continued to perform throughout his teens, winning over 100 first-place titles.

In his career, John has made numerous television and radio appearances and has performed at fairs and festivals and recorded and collaborated with many renowned singers and acts, such as Britney Spears, Susie McEntire (Reba McEntire's Sister) and Lonestar. He is a three-time AG National Fine Arts winner in the field of Male Vocal, a featured artist on The Jenny Jones Show, RFDtv, TangiTV, CBS, NBC, ABC and has been profiled by Power Source Magazine and Music Row Magazine.

In 2013 John released his first duet single “GIVE” with Christian Music Hall of Fame artist Susie McEntire (Reba’s Sister) and Soared to #1 on the Inspirational Country Music Charts in June of 2014 and stayed in the Top 20 for over 5 Months. It also garnered John with two ICMA nominations: Vocal Duo of The Year and New Artist of The Year at the Inspirational Country Music Awards. Rich Miller host of the Nationally Syndicated PowerSource Radio Show said “Give” has the kind of message we need a whole lot more of on the radio. In this age of “more is better” and “what's in it for me” the truth in this song rings loud and clear and the powerful performances from John and Susie really bring it home! Don’t miss this one!!!

In 2015 John teamed back up with Susie McEntire and paid tribute to the loss of his father with an unforgettable single titled “Daddy’s Hands” that was released August 27th and in its first week was a Top 20 most downloaded songs at radio.

Currently, John is working with the best of the best musicians as he plans on his Highly Anticipated new Christian EP that is due out March 2017