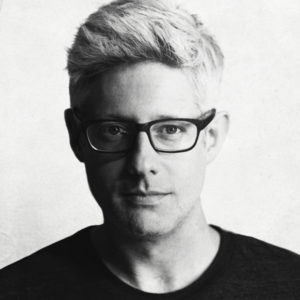 The heart of Matt Maher the worship leader has shown through clearly over years spent teaching, sharing and praying all over the world, including appearances at the Papal Rally in NYC, World Youth Day in Sydney, Australia, and extensive touring over the past 5 years, with the likes of Michael W. Smith, Leeland, Phil Wickham, Jars of Clay, Third Day, Tenth Avenue North and Mercy Me, bringing him in front of more than three million people.

With the September 20 release of The Love in Between, Matt Maher the artist — fully defined, fully formed — steps fully into the foreground.

His third national release on Essential Records shows Maher finding his voice both sonically and lyrically, the rootsy pop aesthetic he introduced on 2010 hit “Hold Us Together” (from 2009’s Alive Again) flowing into a 12-song study of suffering, grace, redemption and hope.

Those ideas coalesce particularly in “Heaven and Earth,” The Love in Between track that inspired the album’s title.

The song contemplates “the distance between us and our humanity and God and his divinity,” Maher says. “There is only one thing that bridges that gap and essentially annihilates it, and that is Jesus. He is the love in between sin and freedom, death and life and hopelessness and hope.”

Maher’s focus grows out of that idea, centering less on distance and more on the bridging of it. The leadoff single “Turn Around,” which debuted at No. 28 on the NAC chart a week ahead of its add date, explores the ways in which Jesus embodied that broad embrace, anchored by the refrain, “If you’re lost and need to be found/ If you’re looking for a savior/ All you gotta do is turn around.”

“If you look back over history, specifically around the time Jesus was physically here in the flesh, humanity has struggled with pride, resulting in a subculture that, while having the best of intentions, ends up marginalizing the people who are most in need of God,” Maher says. “However, Jesus came offering a message of repentance for all who would be willing to receive it. Those on the outside and on the inside of the Church.”

The six-time GMA Dove Award nominee also recognizes that he’s a living example of the value in shedding boundaries, be they perceived or physical. Raised Catholic in Newfoundland, Canada, he was inspired to pen “Woke Up In America,” a personal and patriotic anthem on The Love in Between.

Maher shares, “The song is really about the story of the individual as an allegory for the story of a nation and its struggle to find freedom and identity.”

The Love in Between’s release comes during a time of many big new developments for Maher. The new husband and his wife Kristin welcomed their first son, Conor, in early August; in early September, he’ll launch the first in a series of headlining tours hosted by his newly formed organization Comm+Unity, which will support multiple local, national and international non-profit efforts.

Maher headlines the first jaunt, which kicks off in Texas and runs through to the West Coast (including a Gilbert, Ariz., album release show on September 20), with support from one sonic society (Jason Ingram, Stu G., Paul Mabury) and Integrity artist All Sons & Daughters (David Leonard, Leslie Jordan).

Throughout October, he’ll headline the newly launched, month-long, “Compassion International Presents: The Love In Between Tour,” a partnership with Compassion International and Christian radio featuring Laura Story and Essential Records newcomer Andy Cherry. To close out the year, Maher will join Mercy Me on the “Rock & Worship Road Show” before spending the Christmas and New Years holidays with his family in Arizona.

Not any of this has happened overnight. It’s taken four years of non-stop touring and several more focused on writing and recording, to yield four Top 200 CCLI songs over six years and more than 275,000 in sales of his independent and Essential Records titles to reach the clarity Maher has funneled into The Love in Between.

Mike Snider of Paradigm Talent Agency figures that’s built Maher not just into a marquee name, but one with staying power. He notes, “In addition to his sales and songwriting placements, Matt has stepped to the plate as a hard-ticket-selling, headlining artist, who is going to help shape and re-define touring as we know it.”

Matt Kees, Director of the Christian Musician Summit, concurs. “Matt Maher is a great fit for us at the Christian Musician Summit – he has the ability to reach people on a variety of levels at our conferences and we’re excited to see how he’s made the steady climb into an impactful and enduring artist who people want to see. Not only is Matt a well-trained and accomplished keyboardist and guitarist, he is a top-notch songwriter, and a well respected lead worshiper with years and years of ministry experience. Matt can teach, perform and relate to Christian musicians and fans.”

Maher, always ready to share the music and the Gospel offers, “At the end of the day, I’m just thankful to be in a place where I get to share the music I was inspired to write. It’s been a great road and I’m looking forward to sharing the songs from The Love In Between with friends and fans everywhere.”