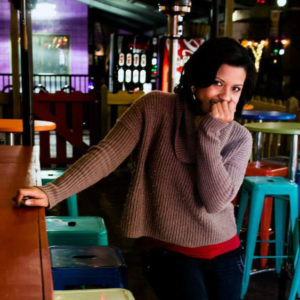 When you think of Brazil, you think of beauty, beaches and music. Add one more thing: love in a smile. Born twenty six years ago in one the most powerful cities in the world, Rio de Janeiro, Michelle Paulino is the oldest of two singing daughters. Coming from a military family, Michelle was raised all over Brazil, allowing her love for people to increase as she got in touch with new cultures within her own. Languages and cultures had always been part of her life and was by watching american sitcoms and translating songs that Michelle learned English.

Early in life Michelle felt that touching peoples lives through music was her true calling. Her career began at the young age of 12 years old, when she was cast as the lead singer of an Easter cantata for her home church in the capital of Brazil. Shortly thereafter, Michelle made her next move by joining a choir and becoming a worship team leader in one of the biggest churches in Brazil, bringing music to life in a christian community of approximately 7 thousand members. She had her sights set on a bigger picture. Willing to bring souls closer to Jesus Christ, exposure to the music world and the offering of her voice to worship God inspired Michelle to pursue music as a ministry. However, she had yet another dream to fulfill, the one of becoming a marketing professional. Attending one of the top 5 universities in her country, Michelle was set in the pursuit of Advertising as her bread and butter. Music had always meant passion more than business to her, but Michelle intended to use one skill to assist the other. She used her Marketing and Advertising skills toward the music ministry.

It was in school that she was able to take her next step by creating her first logo and press kit to promote her worship band Arca Para as Nações (The Ark to the Nations), founded by her and childhood friend Maxwell Martins. Practicing out of her garage on a military base, this humble beginning was a huge boost for Michelle in believing that her message could be received with open arms. She found herself submerged in the hardship of making it into the music industry, as the band suffered for not making a sound commercial enough. The big change was yet to come.

After moving to the United States to start a brand new beginning in the name of love, a career in music seemed to be a very difficult dream to reach. Guided by Douglas Rogers, a local producer that donated her a few tracks, Michelle found a different way to talk about Christianity. She added a tropical feel to contemporary Christian Pop/ R&B beats, posting her home recorded songs on her Myspace page. “My heart had always been in worship, but I felt the calling for something different, a style that would catch attention but pierce hearts with the same truth a worship song talks about. I just needed to find a way to do it”, said Michelle.

?Growing up around sounds like the ones of Whitney Houston, Simply Red, Jon Secada, Hillsong, Mary Mary, Crystal Lewis, DC Talk and Nivea Soares, Michelle Paulino had found a voice tone and style that was quite unique. Being contacted on Myspace by Delbert Harris, CEO of Javo Records, Michelle faced the reality of a dream coming true. She would become the first Pop/R&B recording artist for the label. “You would be surprised with what a simple Myspace page can do.”, said the singer. Working with renowned Christian artists, Michelle made some prosperous connections in the music business. From that point on, everything has been nothing but progress for Michelle.

With only an EP promoted locally, Michelle attracted audiences far and wide as her very first single Spring Time made it to over 20 national Christian and secular radio stations, to the biggest secular radio in Trinidad & Tobago and to radio stations in the UK in less than a month of its release with absolutely no Marketing campaigns to promote it. Recently signed to Christ Hu Nterz Productions out of Seattle, WA, Michelle Paulino hopes to reach the hearts of the people who need Jesus Christ and His healing with her debut album “In The Making” co-produced by  Cross Movement artist K-Drama and to be released early 2012. Bringing an outside view on life, Christianity, and people, Michelle Paulino is willing to say aloud what all of us scream inside, inspiring many to bring morals and godly principles back to our lives through music.