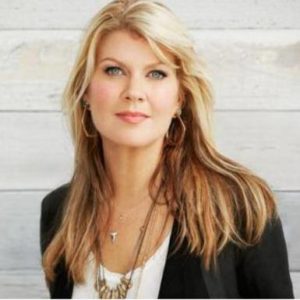 In the opening lines of “In The End,” the spirited but poignant unplugged track that wraps her latest Curb Records album Hurricane, Natalie Grant puts it as plainly as she ever has in dealing with the troubling storms we all face: “Can’t catch a break/You’ve had your fill of old clichés…”. Emerging from a dark, spiritually challenging time in her own life, the multi-talented singer/songwriter—a Grammy nominated, five time GMA (Gospel Music Association) Dove Award winner for Female Vocalist of the Year – breaks through the well worn and cheerful, but not completely truthful, phrases that often leave those who are struggling in need of more. Open and honest about her personal struggles and hardships over the past few years, the visionary artist offers a rare, gutsy vulnerability throughout ten tracks that chronicle her journey from despair to hope, darkness to light and distance to intimacy.

A mainstay on the Billboard Christian Songs chart with numerous #1 hits over the past decade, Natalie — re-affirming her status as one of gospel music’s most popular artists – is enjoying out of the box success with the infectious title track “Hurricane,” which quickly hit #1 on iTunes, charted on Billboard and Mediabase and is the fastest rising single of her storied career. “I love this album because while stylistically I am still very much in the pop realm, it’s a much more personal project than I have ever done before,” says Natalie, who wrote on eight of the ten tracks, her most ever over the course of eight recordings beginning with her self- titled debut in 1999. “I’ve never taken three and a half years between releases, but that lengthy process allowed it to be an honest reflection of what was going on in my life during this period. Because I am a mom to three girls now, I thought when I started the project I would be less involved than I usually am in the writing and production process because I wouldn’t have the time.” But the reality is that Grant was the most involved, and the result is the record of her career. “Where at one point I thought I wouldn’t have the emotional space to do an album this soul searching and raw,” she adds, “once the creative dam broke, it was like therapy for me. I gave voice to the burdens I was carrying and feeling inside. Laying it all out there helped me begin to deal with the struggles I was going through in my life. Hurricane is full of my stories and is a reminder that no matter how dark the struggle may seem, we’re not alone – and hope always wins. The last thing the world needs is just another singer and just another song. I want to be a voice that will burn bright with hope. People are desperate for something real, and that’s why I make music.”