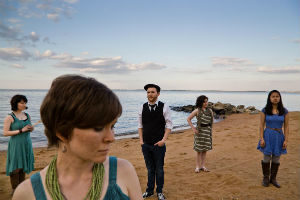 Seasons is comprised of the siblings Mary-Kate Spring, Peter Winter, Mary-Teresa Summer, Mary-Grace Autumn, and Mary-Clare Chun Lee. The Lee siblings seek to not only pay homage to the rich tradition of Celtic and American Folk Music that they grew up in, but also to treat it as a living, breathing entity. The result is a constantly growing collection of original songs and tunes that are all at once both fresh and familiar.

Utilizing diverse instrumentation including the Celtic harp, hammered dulcimer, violin, mandolin, guitar, bodhran, and penny whistle, Seasons has recorded multiple albums, “Eventide Lullabye” (2006), “Which Way to Dublin Town” (2009), and collaborated with Mary-Kate on her solo album “Mirabilis” (2010). In March of 2012, Seasons released "Amhrain," a collection of traditional and original Irish airs followed by their return to Christmas music with "Joy on High" released in December of that same year. 2014 saw the release of their self titled album "Seasons" comprised completely of original songs and tunes. "Lighthouse Keeper's Daughter" a song off this record, was featured on the compilation album Celtic Pink Ribbon Volume III alongside tracks by artists such as Scythian and Carbon Leaf. Proceeds of the album go to assist in breast cancer awareness and research. Seasons albums have received recognition in publications such as Musicmaker’s Magazine, Catholic Digest, Christianity Today, and Grapevine Online, and also have been played on regional and national radio. Their song “The Helmsman,” based on a poem by St. Faustina, was selected as one of the songs on the highly anticipated audio recording of St. Faustina’s Diary (published by Marian Press).

The Lee siblings have toured in multiple states and countries and have opened for artists as varied as Grammy award-winner Ashley Cleveland, the Celtic-rock band Scythian, Irish Tenor Mark Forrest, and Celtic Fiddle Festival. The Lee siblings have been featured performers at many national music festivals including The Celtic Fling & Highland Games out of Manheim PA, the LAUNCH! Music Conference and Festival, and The Millennium Music Conference and Festival. Seasons has performed on both regional and national television, including EWTN programs “Life on the Rock” and “Dana and Friends” as well as on “Fox and Friends” on Fox News.

Members of Seasons have also distinguished themselves on the festival competition circuit. Mary-Kate won first place in Celtic Harp at the Maryland Irish Fest in 2012. 2013 saw Mary-Kate and Mary-Grace return to the Maryland Irish Fest, with the two of them taking away the first place awards in Singing, Celtic Harp, and Miscellaneous Instrument. That same year, Mary-Kate also took second place at the CCE Mid Atlantic Region Fleadh as well as traveling to Derry, Ireland to compete in the CCE All Ireland Fleadh. In 2014, Mary-Kate won first place in both Dance Tunes and Slow Aires at the CCE Mid Atlantic Region Fleadh along with taking third in singing. Once again she qualified for the CCE All Ireland Fleadh and competed in Sligo.

From Musical Festivals to Renaissance Fairs, from busking the streets of Ireland to performing for school assemblies, Seasons strives to share their music where and when ever they can. With their influences ranging from O'Carolan to Yeah Yeah Yeahs, the group creates an exciting and surprising fusion of various Celtic and American folks styles in their original music, resulting in a sound that is truly worth a listen.