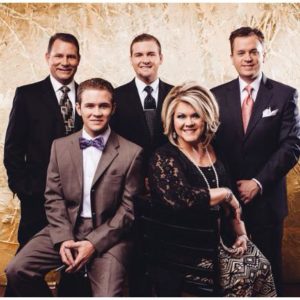 Over the years, many Southern Gospel groups have come and gone. But there is one group that has stood the test of time. This Morganton, North Carolina based group has been singing and ministering through song across the United States and Canada for 43 years. Jeff Whisnant, owner and manager says, “We placed our ministry in God’s hands 43 years ago and have watched Him do miraculous things. There is no doubt in my mind that God has His hand on this ministry.”

The current line-up of Jeff and Susan Whisnant, Austin Whisnant, Ethan Whisnant and Aaron Hise have a sound that fans, church music ministers and promoters have enjoyed for years. Jeff says, ” I have asked God to allow us to be the very best that we can be so that He can use this ministry to touch people’s lives. He has done that!”

Other achievements have been being nominated for Trio of the Year 9 times and getting numerous individual nominations (Favorite Young Artist, Favorite Female Singer and Favorite Alto) to name a few. They have made 18 appearances on the National Quartet Convention, appeared on the Gospel Music Southern Style Program (INSP Network), participated in the Feb. 2007 Gaither Video Taping in Nashville, TN and have performed in Hawaii and Canada.

As you attend a concert or worship service with The Whisnants, their goal is that the message of their music will be clear and will point people to the Cross of Christ.