Home›Artists›To Write Love On Her Arms

To Write Love On Her Arms 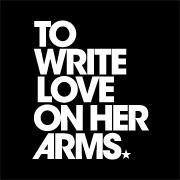 This began in the spring of 2006, when To Write Love on Her Arms founder Jamie Tworkowski wrote a story about a friend struggling with depression, addiction, and self- injury. The words and the life it represented shed light on the reality of contrast—pain and peace, addiction and sobriety, regret and freedom. The title, “To Write Love on Her Arms,” also represented a goal—to believe that a better life was possible. A MySpace page was created to give the story a home, and T-shirts were sold to pay for the friend’s treatment.

As the days passed and the blog was shared, it became clear that this story was not just about one person. We heard from people longing to lift the heavy weight of depression, to be free from addiction or self-injury, to stay alive and live fully. We also heard from people mourning those they’d lost to such struggles, asking what they could do to bring hope to their communities. We learned that two out of three people who struggle with depression never seek help, and that untreated depression is the leading cause of suicide. In America alone, it’s estimated that 19 million people live with depression, and suicide is the third-leading cause of death among those 15-24 years old. It seemed we had stumbled into a bigger story, a conversation that needed to be had. These are issues of humanity, problems of pain that affect millions of people around the world, regardless of age, race, gender, religious belief, orientation, and background.

Over the years, TWLOHA has become much more than a blog and a T-shirt. Through musician support, tours, and social media, the message of hope and help has reached an audience broader than we could have ever anticipated. We’ve expanded from a computer screen to conferences, campuses, programs, and events around the country and the world, where we challenge the stigma and stereotypes that have surrounded mental health issues for so long. And we’re investing into treatment and recovery, offering financial support to organizations, centers, and individuals laboring in the priceless work of healing.

TWLOHA is honored to be a part of this continuing story, to invite people into the conversation, and to be a bridge to the better life we continue to believe is possible.